CEMETERY SUNDAY 2012:  A great number of family members of Redemptorist Brothers and Priests, buried in our community Cemetery here 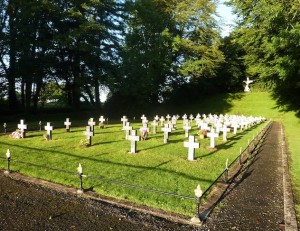 , travelled to Esker for our annual Cemetery Sunday. The weather was not kind to us, the Mass was celebrated in the Church, and the prayers said, as it was raining too heavily at the time. It was great to welcome so many who came, some from long distances, to honour their deceased relatives, many long since dead.

The following homily was given by the Rector of Esker, Fr. Brendan O’Rourke

The first Irishman to be professed as a Redemptorist Brother was James McVeigh.  Father McConvery writes:   “He was an Irish-speaker from County Tyrone, born in 1829, the year of Catholic Emancipation.  He had been apprenticed to a shoemaker in Omagh, where he assisted at one of the earliest Redemptorist missions in 1852.  During the renewal of the mission the following year, James approached Father van Antwerpen, the leader of the mission, to ask if he might be accepted as a brother candidate.  His delicate health told against him and he was refused.  James was insistent.  He took off to Bishop Eton, the Redemptorist house in Liverpool, the following year, to renew his request.  Again, the answer was far from encouraging.  He was directed to the Passionists, but his poor health forced him to leave after a short stay.  He returned to Liverpoor and took up his trade near the monastery.  His persistence was repaid when he was eventually accepted.  He was admitted to profession in 1860.  As is often the case in monasteries, James, now Brother Stanislaus, never got the opportunity to practise his trade again.  He served in the various Irish communities, dying in Esker in 1909.”

I looked for Br. Stanislaus McVeigh’s grave over in our cemetery.  It isn’t there.  I wondered where was he buried?  And I emailed Fr. McConvery and he referred me to the chronicles of Esker.  There, in the first book of the chronicles of Esker, I found the description of Br. McVeigh’s death.  It also described how, given that they had not yet developed a cemetery in Esker, his body was escorted to Athenry train station.  The community, all wearing their habits, walked beside his coffin, and then sent his remains in a train car specially set aside, for burial in the crypt of Mount Saint Alphonsus, Limerick City.

So in Brother Stanislaus McVeigh we are connected to the roots of Esker even before the days of a cemetery here!    As many of us walk around the cemetery, and read the names of friends, family, and characters we will find some we liked or loved, and maybe some whom we found to be heavy going!!  We are clear, I hope, that none of us are perfect, nor were any of the men buried in our cemetery. But they were good enough for God to work with and through!

And so are all of us, good enough for God to work with and through. And usually in ordinary ways.

A woman mystic of the Middle Ages said that while it is true to say that God is love it may be even more true to say that love is God! In other words, while the idea of God may be a struggle for some of us in our lives.  Our understanding of God may change throughout our lives.  But this mystic is saying to us, I think, that we should just keep our eyes, mind, heart and soul open to the presence of kindness, gentleness, thoughtfulness, fairness, justice, caring, compassion in life and then we will have met God

So, today, we honour and connect with all those who have gone before us.  They invite us, from their colourful or their black and white lives, from their great and small achievements, and even from their mistakes and sins…they call us to let God’s Spirit flow through us, to live fully, to not fear making mistakes, and to not postpone living, loving, connecting, and caring.