What the Mouse saw in Bethlehem: Part 1: Christmas Day 2013. 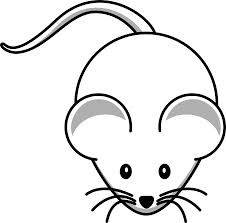 Or What the Mouse Saw in Bethlehem.

Cold was not the word for it! And dark too, even for a mouse. The dark I didn’t mind too much, but I shivered that night with a mixture of cold and hunger. It was the deep of winter, inside of me and out. I curled up in self pity. I slept fitfully, with the taste of lonely tears my only soothing. What happened next is still so clear to me. When I remember, I am back there in that moment.

I hear a rustling. I’m wide awake with fear. Footsteps! One heavy, with boots, one lighter, slower and weary. There are soft urgent voices. “Over here! Over here! Take it gently…’ And then “O, thank God! At last!’

A rustling of hay, away above my head. Some of it falls near me, and wisps of straw from the place where the flock feeds. I cannot move, with fear. I hear a woman’s voice: ‘I think the time is now! Joseph, hold me!’ and then a cry of pain from the woman.

I smell blood. There is water on the ground. The woman cries again.The man with the boots moves still closer. I can hear their hearts beating in fear, just like my own.

And then, the cry of a baby born. The sound of relief from that mother, a cry of long-awaited joy: the comforting by the man with the big boots, as he hands the crying child to the exhausted mother. ‘Mary, it is a boy!’ Something strange there in the way he said that. 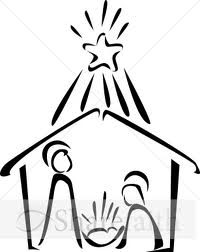 In the cold and dark, two faces seem to light with greatest joy: they glowed with warmth and pleasure. You’d think the saviour of the whole world had just been born!. I move a little closer. I can see the child now, hungrily feeding from its mother’s breast. Look at the mother’s eyes. How they are lit up.  Look at the man’s eyes, drinking from the delight of both of them. My feet, no longer cold, are dancing. My tail wiggles with their joy. There is music in my heart. My place seems so much brighter, just having them here. With this new life, somehow there is a twinkle in the air.

The man with the boots is moving about now, gathering straw. He’s making a bed of it for mother and now-sleeping child. At last, he is sitting down beside them, loosening his boots. He holds his woman close, and the weariness of the journey and of the birthing covers them with gentle sleep. I curl up again, this time with joy to lead me to my dreams.

Late into the night, while stars can still be seen through openings in my roof, I hear voices coming close. I know those voices! And yet, they’re different, they are excited. Other sounds are there too, sheep bleating because they have been disturbed from sleep, now moving in the outer dark. Then there are those smells that hit my twitching nose, – smells of bodies never washed, smells of animal-skins worn against the cold of winter nights, and clung to beside many night-fires. I know them all, those minders of the sheep, rough men, foul-mouthed , un-schooled. Yet, they’re nobody’s fools. Fiercely loyal to each other in the face of a despising world; for they are considered the scum, the un-godly ones, cast out by most people.

What brings them here, at this unearthly hour? The woman and the man stir, the child begins to cry.

The shepherd people have stopped outside. I hear them.  ‘Let’s look in here’ says one, and he begins to open my creaking door. ‘It’s true!’, he cries. ‘It’s true! There is a child here after all. Come and see for yourselves.’ Now the others are peering in, and they’re just standing there with mouths wide open. They’re just gazing and gazing at the child, then at the woman and the man with the boots.

The door opens wide, and in they flock, pushing and shoving. Oh the smell of them! But I love them all the same.

‘We had to come!’ they are blurting out. ‘Somehow we just knew, by our fireside, that we had to come here, to where flocks are fed. Something spoke to our hearts, out there in the cold. We didn’t believe it,- but we came,  and now we see!’ 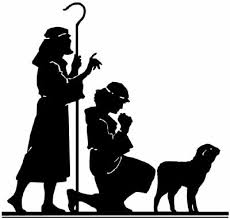 I now I hear them tumbling out words about ‘God’s angel’ and ‘message’ and ‘our Saviour’,- and as they are saying all this, the woman is looking at them and taking it all in. These rough and smelly shepherds whom I know well and love dearly, they’re all just gentle and silent, now. They are gazing and gazing, and wondering at the honour of it all. Next, they’re kneeling around the child as if it’s one of their very own, one of themselves.

And the woman’s eyes are telling them that yes, this new baby is indeed one of themselves, their very own.

In time, those gentle souls are stepping out of the darkness and into a dawning light.  Into a whole new day.

Can I tell you now that in the days that followed, those outcast shepherds guarded that little ‘trinity’ of people, – the woman, the child,  and the man with the boots. The child was at home with all those shepherd smells.

Other folk passed by my home, those days, and never bothered to come in, but the ones of no importance were our most special visitors, our V.I.P.s,  each day.

Thanks for listening. Even as I tell you my story, my tail is wiggling non-stop, my

whiskers twitching and my feet jumping up and down, with the joy of it all.

Can we leave it at that for now? There’s more to the story, but we’ll keep it for another day, soon.