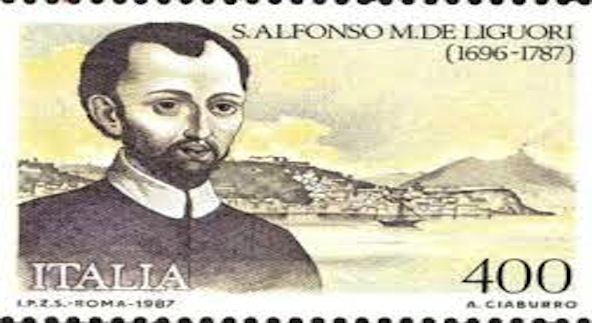 Italian stamp issued in 1987, for 200 anniversary of death of Alphonsus de Liguori.

(See below for ‘Alphonsus, a Man on Fire‘,- poem reflection.

‘There is wide agreement in regard to the main outlines of a synthesis of Alphonsus’ spiritual doctrine. He began with the insistence that holiness and the highest degree of holiness are within the grasp of every human being: ‘God wishes that all should become saints, the priest as priest, those who are married in their married state, those engaged in commerce in the exercise of their business, soldiers as soldiers and so on for everyone else.’  Sanctity is not incompatible with any state of life. Alphonsus preached this doctrine along the streets of Naples, in the country villages, in the piazze of innumerable centres of population. (Note: ‘The Universal Call to Holiness’ is found in Vatican 11 ‘Lumen Gentium Chapter 2. Ed)

The holiness he inculcated is not some vague feeling or aspiration; it consists simply in the love of God. It was to be the constant effort of every confessor, even in the remotest regions with the most uneducated of persons, as well as of every spiritual director, to awaken this love of God in souls. God as been infinitely good to us. We see his goodness manifested above all in the person of Jesus Christ, our Redeemer. ‘What more could God do for us”’ is a recurring question as Alphonsus dialogues with souls to bring them to ‘show love for love’. ‘So many preachers and confessors neglect to speak of love for Jesus Christ which should be the principle, if not the only devotion of a Christian,’ he complains in his Novena to the Sacred Heart of Jesus. There is nothing complicated about his exhortations to love God in Jesus Christ, as he outlines, with unashamed emphasis on the imagination and the emotions, all aspects of the mystery of the Incarnation from the birth of Jesus to his death on the Cross.’    (op. cit. p.47)

A favourite phrase of Alphonsus was to speak of God as ‘pazzo per amore’, -crazy with 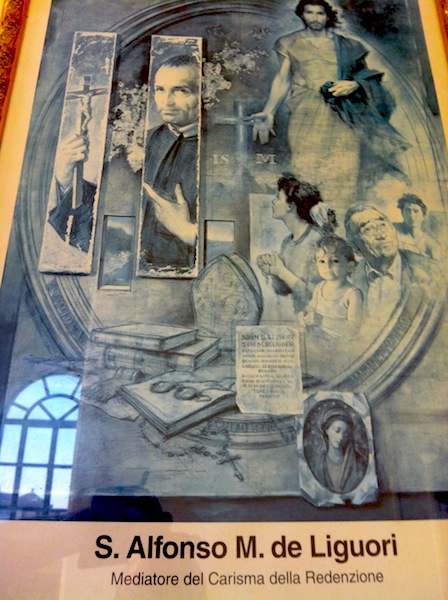 Alphonsus is referred to as 'Mediator of the Charism of Redemption' in the Church.

love for us, or ‘impazzito per amore’, made crazy with love for humans. (The word ‘pazzo’ occurs 175 times in his writings). It was at the heart of his preaching, and it was manifested most clearly in the humanity of Jesus Christ, from his birth in Bethlehem to his death on Calvary: manifested in the Eucharist among us: manifested in the motherhood of Mary for us all. ‘Return love for love’ is what Alphonsus asks, again and again.

Among Redemptorists, Teresa of Avila is known as ‘our holy Grandmother’, such was the influence her writings had on Alphonsus. Both give great emphasis to going to God continually through the humanity of Jesus Christ. Teresa, in the same reading for October 15th, says: ‘I made further careful investigations and learned that holy contemplatives like Francis, Anthony of Padua, Bernard and Catherine of Siena advanced by no other way that this one.’

The four ‘pillars’ of Alphonsus’ preaching and call to holiness were: Crib, Cross, Eucharist, Mary.

‘Return love for love’ was at the heart of Alphonsus’ preaching. 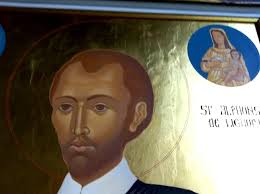