What Blessed Pope Paul VI said spontaneously to a Redemptorist gathering, in 1973. 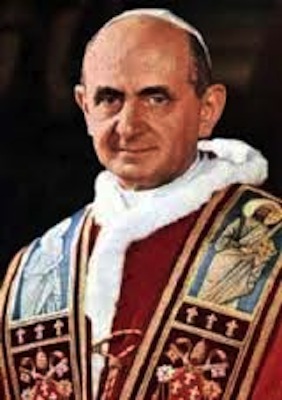 Recently, Pope Paul VI was declared ‘Blessed’, or beatified. It was he who was the ‘helmsman of the Second Vatican Council’, guiding it to its completion in 1965. Years later, in 1973, he met with a group of Redemptorists who were gathered in Rome for the General Chapter of the Redemptorists. After reading his prepared text, he laid it aside and spoke ‘from the heart’ to those present. Fortunately, one person was able to record his words, which have been a great encouragement to Redemptorists in all the parts of the world where we work. The text of his words has been made available to us again, after his being declared a Blessed of the Church by Pope Francis. First an extract from it, and then, below, the full text of what he said.

Won’t that be enough in Latin?

When one’s heart is so moved, as ours is at this moment, at the presence of these dearest sons and friends and brothers now visiting us, and when one’s mind is conscious of the function and vocation you have in the Church and in the world, we cannot keep back what we feel on such an occasion as this.

I don’t know if you will all understand Italian … but that doesn’t matter.  You will at least understand…that’s right, isn’t it?…our fatherly gesture, which wants to say this:

First of all, know that we have a great affection for your religious family, a great regard for it…  We place great confidence in you.  Be assured that you are loved by the Church, and especially by this Apostolic See, which, though we don’t merit it, at this moment we have the great honour actually to represent.

Know well, too, that you are genuinely united to us.  It has been very well said in your name: “Faithful to our tradition, we must feel that we are solidly united with the Church of Rome, with the Chair of St. Peter.”  Very well, feel assured that this is reciprocal …the Chair of Peter, the Church of Rome is united with you; it wishes you well; it esteems you; it is grateful to you.

Then we are grateful to you also, because you exercise one of the great, if not one of the greatest, means at the disposition of the Church’s ministry, and one we want to recommend to you very much – spiritual direction.  Like St. Alphonsus, be really good confessors.  We need them so much.

Just yesterday, during a conversation with another ecclesiastic, we were talking about the way things were going in the Church, and the well-known scarcity of religious vocations, and we were looking for the reason.

Well, the cause is this: guidance is no longer given in the confessional, there is no longer any spiritual direction.  A candle, we said, does not light itself.  One candle that is lit must pass on its light to the one next to it.  The priest must communicate his own vocation, his own enthusiasm at being called to serve the Lord, to another youthful life still lacking experience of it, but capable of recognizing and accepting the call.  You can certainly multiply the forces of the Church and console her in one of her gravest necessities, by sitting patiently and using your wisdom and knowledge – as is characteristic of the Redemptorist Fathers – in the confessional, celebrating the Sacrament of Penance and giving spiritual direction.

And there is another thing we want to say to you – a big “Thank You” – as big as the world itself, that is, extending as far as the distant regions your missions reach.  How often we see: here, there is a Redemptorist Bishop; here, a Prefect Apostolic; here, a Vicar Apostolic; here, there is a mission entrusted to your confreres.  I want, here and now, to send a big affectionate greeting to all your missionary confreres.  And if you have the opportunity of meeting them, say to them too: “The Pope told me to greet you and to bless you!”

And finally, dearest sons, you have a qualification that distinguishes and specializes you in the Church of God.  You continue the school of morality, or religious ethics, of Moral Theology, of which your Founder St. Alphonsus has left you such magnificent works, with his command to you to pass on this heritage, saying: “Continue.”

You know the crisis through which Moral Theology is passing in the Church, that is, the crisis of relativism, which holds the possibility that Moral Theology can change – just as man’s customs change, and society changes, and theories that govern the world change, so too even the Law of God, of which we must be the interpreters.  This relationship between man and his fellowmen, which Moral Theology codifies and expresses – all this can be submitted to critical, even radical examination, especially on some point where the observance of the Law of God, confirmed by the Church, becomes hard and difficult.

Be really good moralists.  We very strongly recommend this to you.  The Law of God does not change.  We must not easily call into question and subject to discussion what comes to us from God, nor the interpretation which the Church has given with the greatest caution and wisdom.  We must say: “This is what the Lord has said.”  “This is what the Lord wants.”

Have great confidence in the teaching authority which guides all of us, because all of us are disciples of the Chair of Christ who is our Teacher.

These are all flexibilities of pastoral theology; to be pastors is to add love to the knowledge we possess.  And love has so many resources – on the one hand, the power to convince, and on the other hand, to make easy the carrying-out of an obligation.

Be good pastors.  As we said before, get close to souls in the sacred ministry, especially in the hearing of confessions, and you will find out how much indulgence is necessary, how much, I would say, “elasticity” the Law of God itself is capable of assuming, for the very purpose of adapting itself to the weaknesses and requirements of man’s human condition. Courage!  As we have said in our short discourse, take your vocation very, very seriously.  It is a tremendous and unique grace that God has granted you, to be committed by your dedication in the religious life to the service of God, and also to the service of the neighbour of the people of our time.

Attach great, great importance to this choice which God has made of you.  It is not an event, just like any other; it is not a happening like any other.  It is a secret which rests over and influences your whole life, and truly makes of you true ministers of the wisdom of the Gospel and of the grace which Christ has given in inheritance to His Church.

And feel sure that I shall share these sentiments of yours, in my capacity of brother and father, and as one who has been commissioned “to strengthen you, sons of St. Alphonsus Maria de Liguori.”

And to give you a sign of this affection of mine for you, and of my fidelity, I promise to say Holy Mass especially for your Congregation.

Now I give you my blessing.  And then I shall come down among you for a photograph to commemorate the occasion.