THE DOMINICANS ARE BACK IN ESKER!

THE DOMINICANS ARE BACK IN ESKER!  - well, sort of. Click here to watch them on Youtube.   On Sunday last, June 7th 2015, we had a very special day here in Esker. Our preacher was Brother Conor McDonough, Dominican student and deacon. He was invited as part of the commemoration of the Dominicans coming to this site here in Esker, in 1715/1716, after their ‘refuge’ in the woods burnt down accidentally. Br. Conor was joined in the morning by Fr. Denis Murphy OP from the Galway community, and by three Dominican Sisters from Taylor’s Hill in Galway,- Sr. Caitríona, Sr. Michael, and Sr. Páidrigín. It was a joy to have them at the 12noon Mass, and for lunch afterwards. In the afternoon, we were joined here by twelve Dominican students, who happened to be travelling to Galway that afternoon, and came in to Esker to support their confrere, Br. Conor. At the end of the 6pm Novena Mass, eight Dominicans came up to the shrine of the Mother of Perpetual Help, and sang the Salve Regina, according to their own Dominican melody and practice. In the middle ages, the Dominicans in their churches would have Compline or Night Prayer early in the evening of a Sunday, and would have a sermon, and then conclude with their Salve Regina (“Hail, Holy Queen”). The singing of this has not been heard here in our Church in Esker for at least 130 years, and maybe longer! It was very moving, and a ‘moment of history’ to hear it being sung again among us, on Sunday evening. Thanks to the Dominicans who came and graced us with their presence, on Sunday June 7th, 2015. We hope to have them back again,- one Order of Preachers with another Order of Preachers! I think it was a joy for them to come and visit an ancient Dominican Foundation, now in the hands of the Redemptorist Missionaries. God bless them all on their journeys. 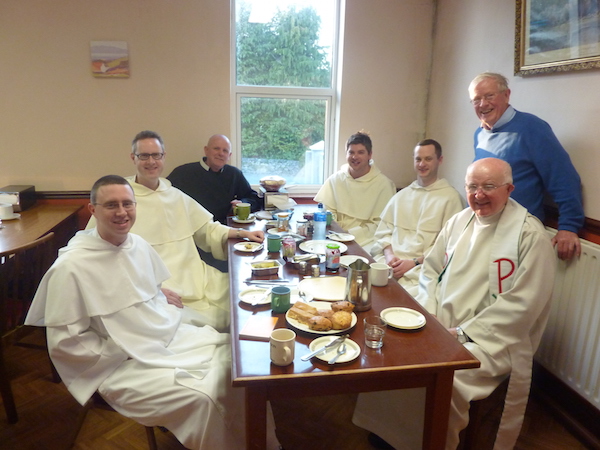 Some of the Dominican Students, dining with three Redemptorists, in Esker: June 7, 2015

Preacher on Sunday was Br. Conor McDonough, OP, a Dominican student, native of Salthill. He had been invited to honour the 300 years since the Dominican Friars came to this very site in Esker, after their house burnt down accidentally sometime in 1715. they began to build on this site, and were up and running sometime in 1716.  This in the early days of the Penal Laws, when all religious were banned from living in Ireland. The woods and the people of this area of Esker kept them hidden and safe. 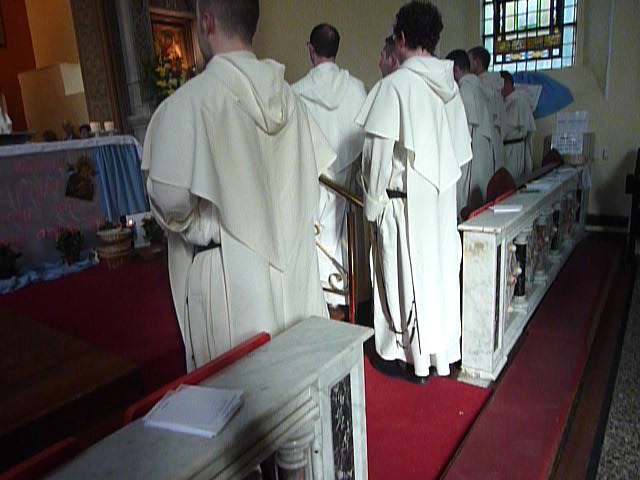 Dominicans in Esker, singing Salve Regina in Dominican way: first time since over 130 years or more! Watch this space for Youtube version of their singing! 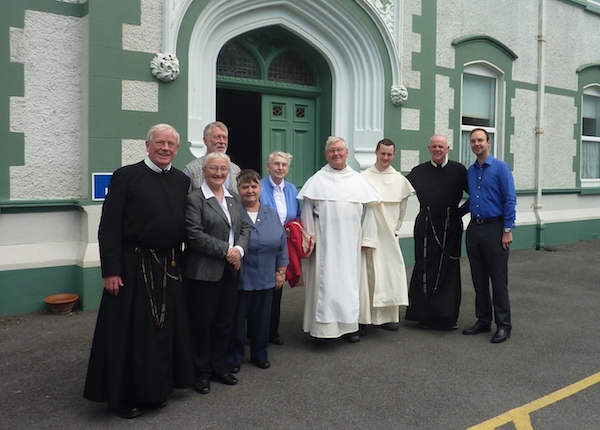