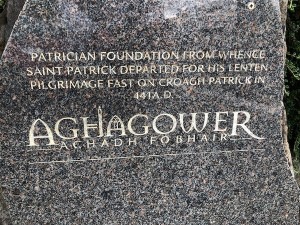 Aghagower: The village of Aghagower lies about six miles from Westport. It is on the path of the Tochar Phadraig or Patrick’s Way, that goes from Ballintubber Abbey to Croagh Patrick. It claims a rich history of contact with our Saint. It is well worth a visit, – if you can find it!

Patrick baptized the local chieftain, Sinach, and ordained him Bishop. 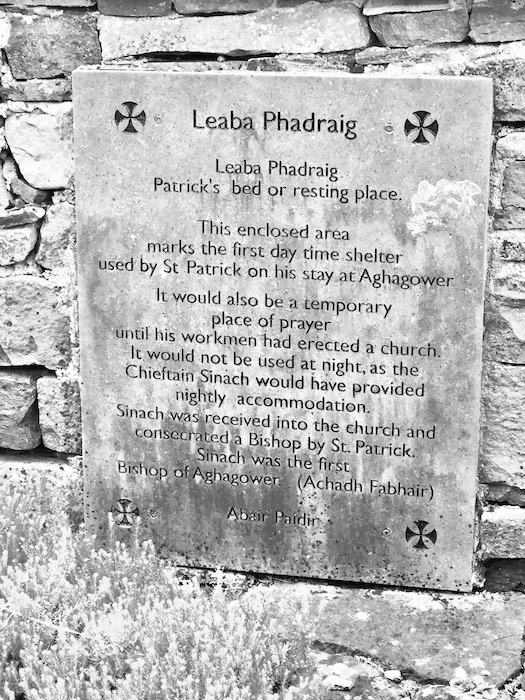 In the village of Aghagower, near Westport, near Croagh Patrick

Soon after, on Shrove Tuesday in 441, he and others walked to nearby Cruachan Ailleach (Croagh Patrick), and spent 40 days there, returning in time for the Easter Ceremonies on Holy Saturday. We ask his prayers now, at this difficult time in the history of our planet and world. 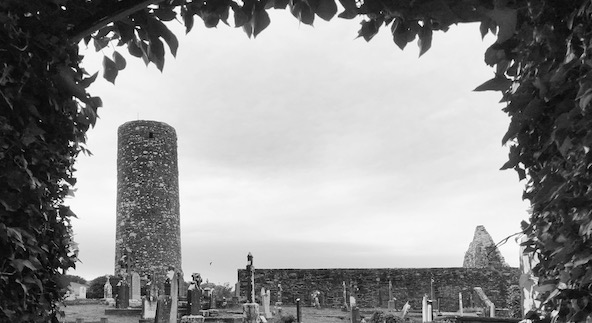 At the village of Aghagower, Co. Mayo: Photo: Seamus Devitt

Patrick was born c. 386 AD,  in Bannavem Tiberniae in Britain (or Britanny?): his father was Calpurnius, a Deacon in his community.

At age 16, young Patrick was taken captive with many others, by Niall of the Nine Hostages, and Patrick ended up, it is said, as a slave near the mountain of Slemish (Sliabh Mis) in Co. Antrim. There he tended sheep and other animals until the age of 22 or so. During that time, often alone on the mountain during the night, he found again the faith that he had learned but not lived, when he was a teen at home. He came to a great love for Christ.

He escaped at about age 22, travelled from Wicklow probably to Brittany. Later, he heard, in a dream, the call to return to Ireland to minister to the people who had enslaved him. He studied in Auxerre, in France, and was there for possibly twelve years. He trained as a priest, and later was ordained a bishop and sent back to Ireland. Many ridiculed him for his folly, but he was resolute.

Tradition is that he landed on a beach at Raholp, in Strangford Lough, in Co. Antrim, and spent his first night in Saul, nearby. There is a church in his honour there today.

He travelled through many parts of Ireland, preaching the Gospel and bringing the Irish ‘heathens’ to faith in Christ. He loved them dearly, despite all his hardships. He was desperately homesick, but would not leave, for fear he would never return. He stayed in Ireland for another thirty years, converting, baptizing, and setting up monasteries.

He died c. 461, and is reputedly buried in Downpatrick.

Patrick left us two writings, one called the ‘Confession’, a song of praise of God for his calling Patrick to work among the Irish people. The other is the ‘Letter to Coroticus’, who was a pirate who had taken captive many newly baptized men and women, and taken them into slavery.

Some quotations from Patrick: (Ireland was the back of beyond, then!)

Jesus was like a magnet, for Patrick. Patrick was drawn to Jesus Christ in a deep way, from the time of his being taken captive at about the age of sixteen. For the six years of his captivity (probably near Slemish Mountain in Co. Antrim) Patrick found again the faith that he had so lightly held, in his earlier youth. Ever after, young Patrick and not-so-young Patrick, was filled with a sense of the presence of Christ and the love of Christ,  all about him and within. ‘Jesus Christ, yesterday, today, the same forever’, said St. Paul. He can be a magnet for us today, if only we let ourselves be drawn to him. He hungers for us, and waits for an answer.

*The ‘Western Sea’ may well be Lough Neagh, which was West of Slemish where the young man, Patrick, tended sheep. In German maps today, for example, this large body of water is referred to as a Zee.

Jesus Christ and his people need young missionaries at this time of our human history, to bring the great news of the Gospel to people of all ages, young and old. Will you hear his voice and invitation to ‘Come, Follow me’, as did Patrick in his twenties?