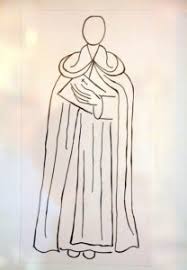 St. Dominic, by Matisse - at Vence

Fr. Denis Luddy prepared this homily for the feast of St. Dominic. Esker owes its origins to the Dominican presence in this area, –  from 1241 in the town of Athenry, and from 1716 on this present site where Esker Monastery of the Redemptorists stands today. We give thanks for the Dominican story and faithfulness through the centuries, and pray for them on this, the feastday of their founder, Dominic de Guzman, Spaniard.

Introduction to the Mass…

Today, Dear Friends, we celebrate the Feast of St. Dominic – a Spanish priest who lived 800 years and founded the Dominican Order.

In marking the Feast of Dominic we are diving headlong into the origins and history of Esker monastery here;    we are bringing to life again the ruins of the Dominican foundation in Athenry — the ruined church there and this chapel in Esker are both dedicated to the Saints Peter and Paul.

And we are looking back on centuries of suffering, bloodshed and oppression, but times of outstanding courage as well — historians tell us that at least five Dominicans  of the Athenry community– three Brothers and two Priests - were martyred for the Faith in this part of County Galway.

Today we pray for Dominican Priests, Brothers and Sisters everywhere.

Next year — 2021 — will mark 800 years since the Spanish priest Dominic Guzman died.

They were known then — and are still known today — as The Order of Preachers, also as ‘Dominicans’.    They are marvellous preachers and when I was living and working in Cork city years ago — I was helped to find my vocation by going to Mass and listening to the homilies preached at the Dominican Church in Pope’s quay.

From their earliest days, then, Dominic guided his men to live very simply;  they lived a mendicant life:   moving around constantly to preach and relying on God’s people for food and support.

They preached all the time and were brave enough to fight the heresies of the time — a heresy is when we twist the Word of God and the Teaching of the Church into ERROR.

So, the time of Dominic — and St. Francis too, who lived at the same time — saw a mighty 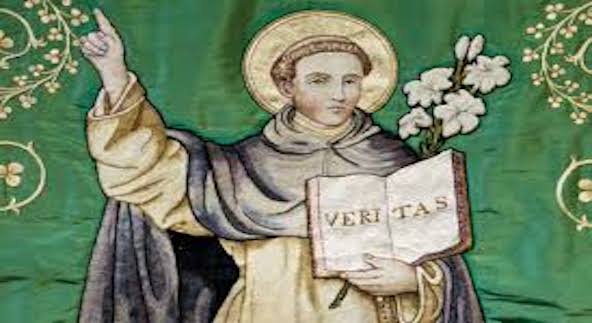 renewal in the church all over Europe through the work of Franciscans and Dominicans.

They were supported by the Irish and English nobility in the area.

King Henry VIII left the Dominicans in Athenry alone but Queen Elizabeth I sent her soldiers to destroy the monastery and the friars were banished.  They went abroad to France, Spain, Belgium. Some few remained here — in careful hiding and protected by the people.  The Priory was invaded, ransacked and handed over to the town.

By the time of the death of Elizabeth I in 1603 — the persecution and suffering had reduced Dominican numbers in Ireland from 800 to only ten or twelve.

Ten years or so after Elizabeth’s death a few Irish Dominicans came back from Spain and Belgium. They made contact with the men who had remained and they put new heart into them to begin again and to struggle on.

These returned friars began receiving and training novices in the remote priory of Urlar, in County Mayo, far from the eyes of the soldiers of James I. They quickly re-founded Dominican Communities in Drogheda, Athy, Mullingar, Dublin and eventually here in the countryside outside Athenry.

They lived near here, first in Gloves North, and then in the woods in Brosk (pronounced Bresk), beyond Dominic’s hill. Young men joined them to become priests and brothers and after their schooling in Bresk, the friars sent them overseas to Louvain in Belgium, and to Spain to do further study.

After the uprising of 1641 in Ireland, Catholics reclaimed their churches. In 1644, The Irish Dominicans at a Chapter gathering in Kilkenny, formally made the Athenry community and school a University — such was the quality of the education here.

It never took off. Trouble and violence came very soon:  Cromwell arrived and ten hard years of persecution began, over the whole island.  His soldiers killed at least five of the Athenry community -  three brothers and two priests. They hanged a Dominican brother, from the Roscommon community, in what is now Eyre Square in Galway (at the site of the Liam Mellows statue). This man, Brother Naughton, had bartered his last bit of clothing in the Galway Gaol for a bit of food. This in 1653.

Make no mistake: the Catholic faith here in East Galway was founded on the blood of marytyrs.

With the death of Oliver Cromwell  ( go ndéana Dia trócaire air) and with the restoration of the king in England,  things got a little bit easier; the friars opened a school in the woods beyond Dominic’s hill, in Bresk. It lasted, on and off, for about thirty five years. Records show that over three hundred students attended — coming from all over Ireland.

But once again, violence and suffering came the way of the people here:  The Battle of Aughrim in 1691 - sixteen miles from us here -  changed Irish history for over two centuries. A few years later, in 1697,  the Dublin parliament — which excluded all Catholics — banished all friars and clergy - Dominicans, Franciscans, Carmelites, as well as Jesuits, Bishops and senior clergy  - from the Island of Ireland.

The Athenry Community took a ship from Galway to France — going into exile in June of 1698.

But — and again we see the working of the Holy Spirit here and the heroic courage of some individuals — two friars remained.   They toughed it out went into hiding for 9 years.   The lands in these parts of Galway were wild – bogs and forest with pathways rather than roads — not a safe place for soldiers or priest hunters.

History threw up a low class of individual — PRIEST CATHCHERS – men who hunted priests for money and handed captured priests to the English authorities.

But, after about nine years, the pendulum swing again, and a lull in the violent intolerance of priests and Catholicism was seen. Five or six Dominican Friars managed to make their way back in 1707.   Denis Daly, a Catholic landowner and a Judge, gave them a bit of poor land in Coilascaul, beside Esker, in a place ‘between two lakes’. Here they build a cabin, deep in the hazelnut woods, in what is called today ‘Nut field’.

Eight years later, fire accidentally destroyed their refuge. Again,  Denis Daly gave the Dominicans some better land: in a drier spot.  That was in 1715 or 1716 and this is the site of Esker Monastery today.

So, from 1716, Dominican Friars lived here and ministered to the people for almost 180 years.

This was the early 1700s and in that time they experienced great poverty: once having to sell their Mass chalices: they kept their heads down: living quietly and doing priestly work “under the radar.”

By now the authorities were beginning to leave them alone and pretend not to notice their presence.

The Dominicans set up schools and taught young men trades.  One school building is now the chapel of the Esker Youth Village.

The Great Famine in the 1840s saw the Dominicans feeding hundreds of people each day — as well as keeping the schools going.

In 1844, they built the Church that we are praying in this morning.

This church of St. Peter and Paul continued the name of the ruined church in Athenry.  It replaced an earlier simpler one which once stood on the site of our Esker Retreat House.

From the early 1800s this locality of Esker and Athenry supplied many vocations to the Dominican Order.   Many lived heroic, saintly lives, none more so than Fr. Anthony Fahy who eventually worked on the missions in Argentina and brought thousands of Irish people to Argentina where they were given farms of land.

Anthony Fahy is a national here in Argentina today. 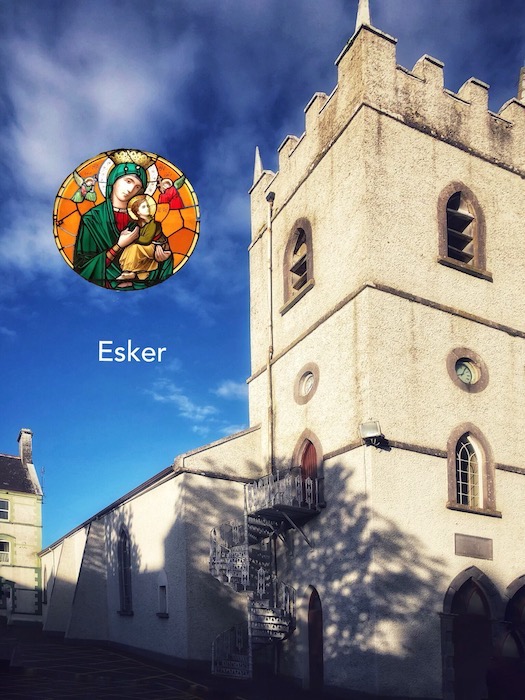 The Window of the Mother of Perpetual Help - first installed by the Dominicans in Esker Church, fifteen years before the Redemptorists came to hear. The window is now in the Retreat House.

The Redemptorists came to Esker in 1901 – only 120 years ago.  The Dominicans lived on this same spot for 180 years. The last Dominican left this place in August of 1893.

Astonishingly, the Dominicans — followers of St. Dominic — were part of Athenry / Gloves / Brosk / Coilascaul/ Esker for about 650 years.

Today we thank God for their lives, their work, their courage, their sacrifices, their faith and their ministry among the people of Esker and beyond.

We pray for Dominicans Sisters, Brothers and priests.

Four years ago, Dominicans throughout the world celebrated 800 years since their story began with Dominic Guzman, a saintly Spanish priest.

May the Lord continue to bless them greatly, in their work of preaching the Gospel to the world.